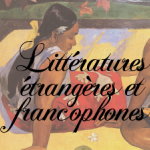 The flies' furious arena: study
These, the two minds of this lady.

First observe the air's dragonfly
That eats meat, that bullets by

Or stands in space to take aim;
Others as dangerous comb the hum

Under the trees. There are battle-shouts
And death-cries everywhere hereabouts

Rainbow their arcs, spark, or settle
Cooling like beads of molten metal

Through the spectrum. Think what worse
Is the pond-bed's matter of course;

Have evolved no improvements there,
Jaws for heads, the set stare,

Which, deep in both worlds, can be still
As a painting, trembling hardly at all

Though the dragonfly alight,
Whatever horror nudge her root.

Ted Hughes is a famous English poet of the twentieth century. He was born in Mytholmroyd, Yorkshire, but raised in Mexborough, a coal-mining town in South Yorkshire. The harsh landscape of the northern England moors had a strong influence in Hughes' poetry.

Think what worse
Is the pond-bed's matter of course

He writes for somebody, even if we don't exactly know whom: it is a general talk about creation.

The title also gives a first impression of what we could call "a whole" for two reasons. Firstly, the poet seems to give a piece of advice to a painter, whereas he is a poet and he uses words and the language (which is the material of the writer). He doesn't give indications of which paintbrush or what type of painting to use (which is the material of the painter). But the poet is tempted to use words to give an idea of what will appear on the canvas:

Rainbow their arcs, spark, or settle

Cooling like beads of molten metal
Through the spectrum.

In this passage, the expression "to see the colours" is built by the same construction as the title (in the structure: to + verb + object). It is a very simple structure with simple words, as "see" and "colours": there is no artificiality. The terms "rainbow" and "spectrum" have the same referent in the world but there is a difference in the language register: "rainbow" is known especially by the children, since they draw some rainbows to learn the name of different colours, whereas "spectrum" is more scientific. It highlights the necessity to introduce the shades both in writing and painting: it could be the first advice given by Ted Hughes to the artist.

Then, the "water-lily" is very interesting, as far as the idea of "a whole" is concerned : it is a flower which grows in both the water and the air. This ambiguity has been underlined from the beginning of the poem, even before the text. Because it is given in the title, which belongs to what Gérard Genette calls in French the "paratexte" (it has no equivalent in English), that is to say, the indications the poet gives before the text himself. The title could be programmatic and could express the difficulty of the project: how to paint / to speak about a protean subject ; how to fix an idea on the paper or an image on the canvas: there is the same difficulty for the writer and for the painter when they are confronted with the nature. The relation between the artist and the nature is really ambiguous and it is a real feat of strength.

At the first reading, the reader's attention is appealed to the theme of nature. The poem seems to evoke a part of nature, since the main subject is a water lily. Could the poem be read as a traditional romantic description?

The text is punctuated by many references to the nature. "Leaves", "flies", "space", "trees", "rainbow"... are typical words in the romantic descriptions for example. The ambience of air (rainbow, flies), of plants (trees, leaves) and of insects (flies) are represented in this world and so do both microcosmic (with little elements like "flies") and macrocosmic (with large elements like "space" or "rainbow"). The first word of the poem is "green", a symbolical way to show the nature in her simplicity, and it also has a metaphoric meaning since it represents the "hope". So that the poem is from the beginning associated to a positive dimension. "Chamber" and "arena" emphasize on the intimacy of the nature and it draws the borders of a world.

However, some words are very ambiguous, so that we wonder if this poem is just a naive vision of the nature. Ted Hughes plays on the polysemy of "dragonfly": it means both an insect and a little lady. This second meaning is pointed out by the parallelism between the terms "lady" and "dragonfly" which are placed at the end of two lines. It insists on the ambiguity of the flower itself: the water lily is not only a plant, it becomes, with the passing lines, a sort of incarnation of a lady which even has human being thoughts and feelings :

Moreover, behind the atmosphere of quietness, there is hidden a real vision of horror: the main theme of the poem is actually a scene of fight, which is more than a romantic description of nature.

Indeed, the construction of the poem shows an evolution: the two first stanzas talk about the water lily. But then, up to the two last stanzas, there is no evocation of the water lily: the nature is introduced as a manner to focus the attention on the warlike activity. The poem celebrates the beauty of the nature in its violence. The author uses some linguistic devices to create this ambiguity. He employs words by changing their first meaning and their traditional context: "bullets by" is used as a verb, and suggests the trajectory of the flies around the plant. But "bullet", when it is used as a noun, also refers to the missile that is set from a firearm. The connotation of this term is very strong and it conveys an idea of war or violence. Then, "to take aim" assume the same connotation and could also be a metatextual indication: the poet or the painter must take aim, choose a point of view and describe it, as a warrior must choose a target.

The work of the poet is also to create some new words with the association of expressions that gives more senses to the language: the compound words like "battle-shouts" and "death-cries" don't exist in the dictionary as real words. The poet has to make a link between "battle" and "shouts", between "death" and "cries" to create new sensations, giving power to the language. Ted Hughes' poetic is based on emotion and no longer laid upon to the traditional conventions. We can read this quotation of Ted Hughes in a self-analyze of his work :

It is better to call it an assembly of living parts moved by a single spirit. The living spirit are the words, the images, the rhythms. The spirit is the life which inhabits them when they all work together.

"When they all work together", says Ted Hughes himself, is a very important idea because it permits to understand the poem as "a whole", as we already said. In the stylistics of the poem, it is brought to mind by the association of terms and the creation of compound words or words grouped, that give more power to connotation, and convey the imagination of the reader. The climax of the poem fits in with the fifth stanza :

The climax of the violence corresponds to the innovation in the writing: "rainbow" and "spark" are used as verbs whereas they are nouns. Then, the image of the "molten metal" is a sort of paradox: how can a metal " which is a so strong element " become so fluid ? However, the poet solves the problem, with the alliterations in -m and -t, when he writes "Cooling like beads of molten metal". The alliteration creates a link between the sense of strong and fluid, and it puts the contraries together.

The nature is considered as an essential being. It is considered in two different dimensions: at first, with a return to the elementary system. It fits in with the etymology in the term "nature", which comes from the latine "natura" from "natus", the past participle of "nasci" which means "to be born". So it has a link with the Creation, as the Poem: questioning about nature is in fact a way to question about Creation in general. It is a way to wonder about the origins.

Then the nature is also associated with human being, the violence that man is able to create is included. The poem goes beyond the dichotomy between Good and Bad: the text doesn't tell that the wars are very awful, or that violence comes from human beings... It doesn't draw a distinction between good and bad, but combines them in order to solve the problem. This simplistic and artificial opposition is denied and put forward the Creation as the only first value.

Creation is a way to go beyond the opposition built between a good nature and the violence. The eye of the artist is the only way to see or to "read" the nature. The water lily symbolizes this idea since the end of the poem expresses:

"Age" and "hour" refer to the same notion, that is to say, the time. But they introduce a ladder in time: "hour" is a short distance comparing to the "age" which refers to a very large period. It goes in the poem with the evocation of the "Prehistoric bedragoned times" and with the reference to the "Latin" civilization which established a bridge between the different times. The poem inscribes in a temporal tradition. The hyphen after "Ignorant of age as of hour" is a material and physical way to make a link between these times. There is another symbolical use of the hyphen: in "long-necked lily-flower", the two hyphens represent the neck of the water lily and suggest both its length and its fragility, since it is "deep in both worlds". There may be a metatextual reflexion at the place of the poet: he is both a writer and a painter, he is both in the two worlds: his role is to paint a scene, but without colours and images, and is just to convey the reader's imagination, which is a real difficulty.

Another difficulty is to make it real in suggesting both movements and stillness: this paradox is depicted in the last stanzas:

Which, deep in both worlds, can be still
As a painting, trembling hardly at all

Though the dragonfly alight,
Whatever horror nudge her root.

The poet doesn't use any coordination between the elements of the lines (especially between "still as a painting" and "trembling hardly"), he uses only some commas which creates a parataxis and emphasizes on the paradox. The terms "though" and "whatever" at the end of the poem underline the difficulty of the project. The two last lines are very important since the first is a reference to the water lily and the nature, whereas the last one is a reference to the war and violence ("horror"). The water lily, as the Art, is timeless and is the only value, the only creation that could stay even if horrors are trembling around.

We could sum up in quoting a sentence of Ted Hughes:

What excites my imagination is the war between vitality and death and my poems may be said to celebrate the exploits of the warriors of either side.

To understand his poetry, we can remember that Ted Hughes studied anthropology: the poet is maybe the medium who can reunite Man with his imagination, the senses and the history. The nature is finally seen in its mythical aspect more than in its description movement.